One thing that I like about working with an open source community like OpenStack is that you get direct access not just to the source code itself, but to its users and ecosystem as well.  This allows you to be less exposed to marketing spins, and actually analyze our actions based on real numbers.
The OpenStack Foundation conducts a very insightful survey twice a year which helps to measure how users are using the technology. This is an important and useful feedback loop that goes to the PTL of the various projects, and can help product companies to analyze their go to market plans and such. You can find the source
I found the original version a bit too verbose, so I took the liberty to put together an executive summary of the main points from the survey, mostly targeted at decision makers. I hope that you’ll find it useful, any feedback would be highly appreciated.

The main reason cited for choosing OpenStack is Open Technology and Avoiding Lock-in.

Cloudify natively integrates with OpenStack. Try it out.  Go

The large majority of the current deployments are under 100 nodes.
Around 30% of the deployments run relatively large scale deployments between 500-1000.

Production seems to follow a similar trend but lower in numbers to QA, which is reasonable as I believe that some of the QA deployments represent a transition stage to production.

The majority of the users seem to be service providers and cloud operators.
There is also a good number of ISVs and ecosystem partners, which is a strong indication that OpenStack is indeed an ecosystem.
There’s a very strong presence of OpenStack in the Telecom industry. Finance seem to be lagging behind the adoption curve with only three financial organizations declaring their use of OpenStack.

The majority of the deployments run on private or hosted private clouds. About 20% run on public or hybrid clouds. OpenStack also seems to attract mostly small to mid-size companies.

The survey includes two categories for deployment tools, one for those that are used for deploying the OpenStack infrastructure, and the other that are used for application configuration (covered in the application survey).
According to the two surveys users tend to use different sets of tools for the infrastructure deployment and for application configuration management. Puppet seems to be the most popular choice for OpenStack users in both categories.
One of the interesting results is to see that Bare Metal and Docker are starting to appear in more deployments. This is fairly impressive given that the two are not yet officially supported by OpenStack.  VMware is around 10%-13% of KVM of Virtualization similar to XEN. 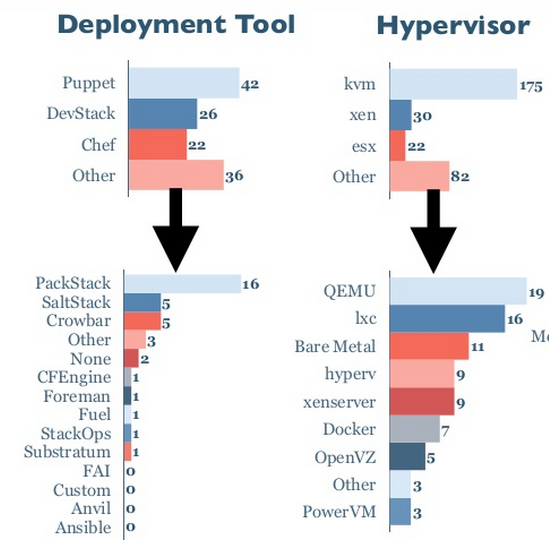 Applications on top of OpenStack

As noted above, Puppet is popular for application configuration, as well as infrastructure deployment. Heat and Docker take the 2nd and 3rd place respectively,  putting Chef behind in the 4th place.
Given the popularity of Heat during the last summit I wouldn’t be surprised if Heat and Docker will surpass the use of Puppet in this category. 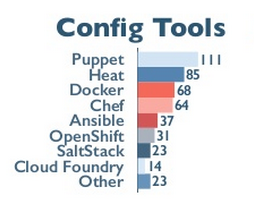 Interestingly enough, JClouds seems to be gaining popularity amongst OpenStack users. This may be an indication that ~ ¼ of the users are interested in frameworks that are not tied only OpenStack. Not surprisingly, Python is far more popular than any other language, however Java seems to have a good and dominant presence more than other frameworks. One possible explanation is that the type of users that are attracted to OpenStack are more of the traditional enterprise organizations, and less of the new web-facing companies.

Ubuntu and CentOS are the most popular choice. Windows adoption amongst OpenStack users is between 10-20%.

EC2 is a relatively popular choice which indicates that there is an increasing desire among the OpenStack community to maintain portability with EC2. This also correlates with the popularity of portability frameworks such as JClouds.