While AWS is still seen as the cloud provider to beat, Microsoft has been making real strides in the past few years with Azure. Microsoft recently reported a higher annual run rate than AWS. They are consistently noted as either the number one or number two cloud provider according to different sources. In our own State of Enterprise Multi-Cloud report published in Q4 2017, we saw that Microsoft Azure’s public cloud was second only to Amazon (admittedly, it was a large margin based on our respondents’ answers).

We haven’t written much about our Azure plugin, which has actually been part of our arsenal since the beginning of Cloudify and was mostly rewritten in late 2016. As with our other IaaS plugins, it enables Cloudify Manager to deploy and manage Azure cloud resources. The plugin also enables users to interact with Azure using both the legacy and SDK-based methods.
For authentication, you will have to create your Azure Service Principal and load the credentials in your azure_config property. 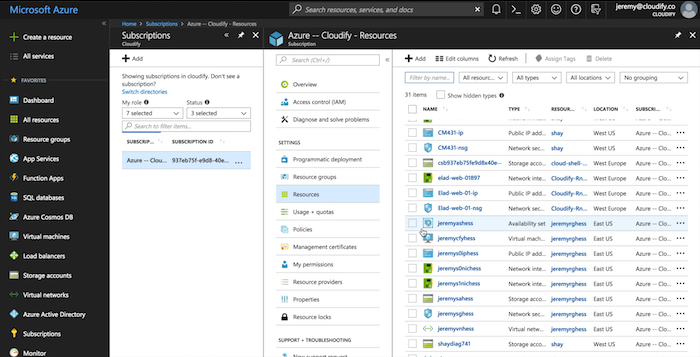 After years of focusing on public-private hybrid cloud, with the private cloud being the datacenter, Microsoft decided to get into the private cloud game themselves. This brought about Azure Stack, which went live in July 2017 and was created to minimize the complexity of hybrid cloud and to compete with OpenStack. Very quickly, Azure Stack became the number one private cloud provider by leveraging their Azure and datacenter client list.
In version 1.6.0 of the Cloudify Azure plugin, we introduced support for Azure Stack as well. Currently we are on version 1.7.2 which should actually be used. What this does is enable Azure users who are also using Azure Stack to easily integrate public and private Azure workloads and manage multiple Azure Stack regions simultaneously.
To configure your Azure Stack client, you will have to add the appropriate values for your endpoint keys, such as endpoint_resource, endpoints_resource_manager, endpoint_verify, and endpoints_active_directory. Also, make sure to specify the appropriate api_version of the Azure resource that is currently supported in your Azure stack.

Watch this great tutorial on deploying resources and installing Cloudify Manager on Microsoft Azure with a Cloudify sample blueprint:

Head over to our docs for more details on using the Azure plugin.
You can also try deploying a simple Hello World blueprint with Cloudify on Azure or Azure Stack. It is always best to start with a clean environment and first use the cloudify-environment-setup to configure your environment for running the Hello World example.
In a future post, we will go into detail about what make Cloudify’s Azure and Azure Stack integration unique and how to leverage it in your organization.