The telecommunications industry is going through a period of significant transition. Having been disrupted by digital-native companies from across the media and internet, telecom owned voice, data, and messaging services are under threat. They must transform their operations and business models to keep up with ever-changing customer expectations.

Martin Creaner, a renowned author of ‘Transforming the Telco’, wrote an interesting analysis back in 2018 on the ‘top 10 digital transformation journeys of the telco’:

“Telcos will learn how to expand their service portfolios to offer new suites of digital services, addressing new vertical markets, with strong revenue growth potential. The telco must learn which service niches best suit their competencies, and ultimately transform their operations to efficiently manage these diverse service portfolios while minimizing operational complexity.”

Creaner wrote this analysis back in 2018 and many of his arguments remain valid – but as with similar transformation attempts in the past, many telcos have failed to transform themselves in line with his perfectly valid suggestions. The question remains: why?

While the writing has been on the wall for more than a decade, the degree of transformation actually needed has proven far too extensive, with little chance of successful completion in line with the telco industry’s organic evolution. Yet public cloud vendors provided an unexpected solution, a new platform to get out of this deadlock of a situation:

The Public Cloud Effect on Telcos

Telcos have taken the ‘if you can’t beat ’em, join ‘em’ approach with the public cloud and were forced into this partnership due to the realization that they can’t really compete.

On the other hand, public-cloud sees partnering with telcos as a growth engine given the number and size of data-centers that they extract from this partnership. Indeed over the past year, we’ve seen public cloud providers forming a special solution group targeted to transform telco workloads into public cloud infrastructures.

5G and IoT: The Catalysts Forcing a New Way of Thinking

Traditional network services have proven rather static in nature and therefore it has been possible to deliver them as stack hardware and network appliances (physical or virtual). The scaling of these services has been met through over-provisioning to meet a peak load demand.

5G, Edge, and IoT bring a new level of sophisticated network usage that is highly dynamic and can be rather fluctuating in usage patterns (as in the case of network slicing) . At the same time, there is a high level of investment required to deliver these network services and they often require a major refactoring of the existing stack (also known as disaggregation of the stack).  One thing becomes clear though, the ROI for such an investment could not be met using the traditional high-touch telco-centric approach. In this context, 5G and IoT use cases become perfect catalysts that will force a new way of thinking about the delivery of these kinds of services.

This is where the public cloud becomes interesting; it can address both the technological and business transformation aspects of telco. Public cloud provides a managed cloud-native stack that fits better with the dynamic nature of 5G and Edge network services. It is also backed with an economical business model providing a lower-cost infrastructure and a significantly more agile platform that better suits new digital services. This combination is what makes the public cloud different from previous telco transformation attempts (such as NFV) which were mostly focused on technology alone – virtualization of the physical stack that misses a compelling ROI story.

When it comes to traditional telco services, pushing software live can take up to 2 years; in the world of 5G this will not suffice.

The following example takes an agile-first approach by applying DevOps practices to 5G network slicing management. The first step taken was using a cloud-native approach to manage the entire 5G network. Here the AWS team used AWS cloud services such as EKS both as the central site and corporate site/edge to deliver a fully cloud-native 5G infrastructure. They used the Nokia cloud-native 5G stack to manage the 5G network on top of EKS.  The management of the network slicing workflow was delivered through AWS Pipeline.

Cloudify is used here as a service orchestration layer that integrates with all the relevant AWS services to deliver end-to-end service automation to the operator. In this example, we used AWS Lambda as the generic interface that calls those underlying services.

Throughout this project we were able to deliver the entire use case including a continuous update in just a few weeks. We were able to iterate, add new features, fix bugs with a distributed team that was spread across India, United States, and Israel because we all had access to the same environment- we were also able to add new features and fix bugs in just a few hours!

The integration between Cloudify and AWS Lambda provided a generic interface that allowed us to access any AWS service and API, add custom logic, and even to abstract some of those services into fewer API calls. This played a key factor in achieving this degree of agility.

You can read more details about this example here.

The Road to a Successful Transformation: Addressing Brown Field Reality

Many of the previous transformation projects such as NFV had failed due to the fact that they undermined the disruptive effect of the move from virtualization to current business. According to a McKinsey study, $850B per year is spent on failed digital transformations.

To ensure a successful transformation it is important to take into account that many telcos are not going to move entire businesses to the public cloud in just one day. This transformation will be a long journey in which traditional network services will need to live alongside new cloud-native network services as described in the diagram below.

Having a common control plane to manage both environments provides a bridge that will allow telcos to take the best of both worlds. 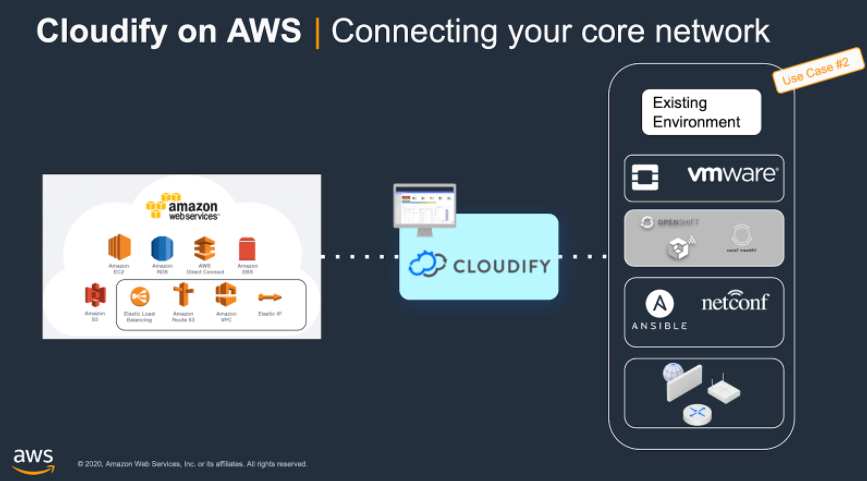 Digital Transformation Bridging the Gap Between Telcos and other Regulated Industries

Throughout the past three decades, telcos have operated as a separate industry, needing its own set of infrastructure, standards, vendors as well as conferences and business models.

The digital transformation effect on telcos isn’t that different from the effect of other regulated business transformations such as FinTech, Manufacturing, etc. These industry technologies were all built as completely separate verticals with their own specialized infrastructure, vendors, and business model. They are all being challenged by new ‘born in the cloud’ disruptors that are running on public cloud infrastructure using a modern cloud-native stack that is managed as code through CI/CD. For these new ‘born in the cloud’ companies, the infrastructure looks pretty much the same regardless of the vertical in which they operate. Differences now seem to relate to business models rather than infrastructures.

As with any transformation, this is of course both a risk and an opportunity. It’s a risk since it forces a fairly radical change to the way these industries have been running for a significant period of time; yet it is also an opportunity allowing industries to focus more on business services, customer experience, and less on the underlying infrastructure for delivery.

To go back to the words of Martin Creaner::

The journey to a successful transformation needs to start with a change in the partner’s ecosystem. sticking with traditional vendors will surely result in locking down to past habits due to an inherent conflict of interest. To put it another way, ‘Show me your friends and I’ll tell you who you are’.

“A step change is needed in the number and variety of partners, and sophistication in how they are governed and engaged with. Ecosystem partner governance balanced with strategic IP management will need to become a strong and core capability to manage open innovation and extensive collaboration.”

Netflix vs BlockBuster is a great example. One of the keys to the success of Netflix was the adoption of public cloud as infrastructure which later enabled a dedicated focus on the core of their business: delivering content and providing a slick user experience at a significantly lower cost.

The picture below tells the entire story.

Telcos as Part of a Cross-Industry Transformation

This brave new world of 5G will not tolerate the traditional 2 year telco time span of pushing software live. The telco industry must significantly shorten its time to market in order to be considered as viable infrastructure partners for the likes of Netflix, Hulu, and other leading content  / OTT providers.

It is important to note that this ‘transformation challenge’ and drive for better agility is not limited to telcos and is also happening across a wide range of industries undergoing similar transformational challenges, as described in a recent AGC report on DevOps trends in 2021:

“DevOps practices are still in the early stages of adoption among industries outside of tech. Over time, Financial Services, Retail, and other adjacent industries will start to adopt DevOps principles and integrate siloed teams to develop and deliver software products more efficiently. This will be the driver for long-term sustained growth in DevOps Source: DevOps Research & Assessment, Research & Market, AGC Estimates “

The DevOps Value Stream demonstrated in the 5G network slicing use case above can be applied to FinTech, Industrial, or Healthcare verticals and yield a significantly higher success rate of such transformation projects.

It is however important to note that the complexity and scale of these use cases require a shift from the simple CLI, tool-chain based approach (and the current tendency to track detailed activities, not business value in current DevOps platforms) to a more holistic approach known as a value stream approach.

In fact, Value Stream Management Platforms (VSMP) has slowly become an accepted norm as they look to go beyond Agile and DevOps and focus on increasing the end-to-end flow of business value from customer request to customer delivery. Even Gartner predicts that by 2023, 70% of organizations will use VSMPs to improve flow and value-add in the highly complex DevOps pipeline.

The combination of Cloudify as the end-to-end service orchestration (Orchestrator of Orchestrators), AWS as the agile cloud infrastructure and DevOps platform can serve as a useful reference on how to turn VSMP from concept to practical reality.

Orchestration At Scale: How Scalability Changes The Way We Handle Our DevOps Automation