*Play framework* is an open source web application framework, written in Scala and Java, which follows the model-view-controller architectural pattern.
It aims to optimize developer productivity by using convention over configuration, hot code reloading and display of errors in the browser.
The moto of “(newwindow)Play framework”:http://www.playframework.org/ is : *The Play framework makes it easier to build web applications with Java & Scala.*
Play is based on a lightweight, stateless, web-friendly architecture and features predictable and minimal resource consumption (CPU, memory, threads) for highly-scalable applications – thanks to its reactive model, based on Iteratee IO.

Well, we’ve just created a recipe that enables users to install the Play framework *on a cloud* with Cloudify and obviously deploy their applications on clouds’ VM.

Cloudify natively integrates with Play Framework. Try it out.  Go

In this recipe, we also enable users to connect their Play application to any DB, either with Cloudify, or by specifying an external DB URL.
In our example recipe, we deploy a slighly modified Play Sample Application named: “(newwindow)computer-database”:http://www.playframework.org/documentation/2.0.1/Samples.
We use our built-in “(newwindow)MySQL recipe”:https://github.com/CloudifySource/cloudify-recipes/tree/master/services/mysql (mysql) recipe and also our “(newwindow)Apache load balancer”:https://github.com/CloudifySource/cloudify-recipes/tree/master/services/apacheLB (apacheLB) and the computer-database application connects to both of them and uses them almost seamlessly.
We’ve also added several useful “(newwindow)custom commands”:/guide/2.1/developing/custom_commands :
* *replace* – which enables users to replace a string in a file (relative to play home folder).
– Usage : @invoke play replace all|first origString newString relativePath@
* *cmd* – which enables users to invoke *any* Play framework command line and up to 3 arguments.
– Usage : @invoke play cmd nameOfTheCommand [arg1] [arg2] [arg3]@
* *updateApp* – which enables users to update their application
– Usage : @invoke play updateApp http://www.mynewapplication.zip@
Cloudify enables you to develop, deploy, compile, package and monitor your application from your desktop even though your Play framework environment and your Play application are on a cloud.
As usual with Cloudify – It works on *any cloud !!!*
Here’s a screenshot of our Web UI on Amazon EC2 (it’s also been tested on OpenStack) : 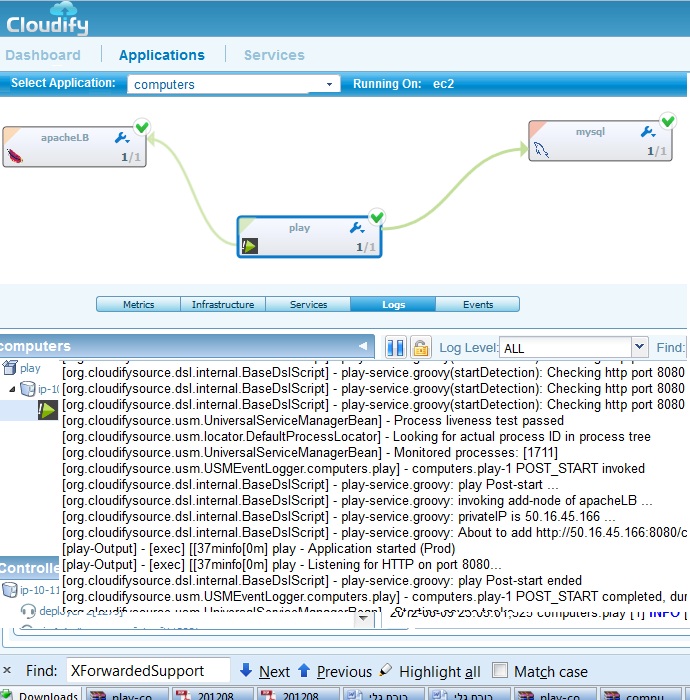 Test the application under load

In order to test your application under load, you can use the apacheLB “(newwindow)load”:https://github.com/CloudifySource/cloudify-recipes/blob/master/services/apacheLB/README.md#load-testing custom command.
The following will fire 45000 requests on http://LB_IP_ADDRESS:LB_PORT/computers with 300 concurrent requests each time:
*invoke apacheLB load 45000 300 computers*

One more thing for the “road”

We’ve also added “(newwindow)scaling rules”:/guide/2.1/developing/scaling_rules so that your Play application can scale out automatically.
If the CPU usage is higher than a certain threshold, Cloudify allocates a new machine on the cloud and on it, Cloudify installs the Play framework and deploys the computer-database or any other Play application.
Once the application is up and running on the new machine, Cloudify registers this new VM to the Apache load balancer.
It all happens “out of the box” with Cloudify.
Check out the “(newwindow)computers”:https://github.com/CloudifySource/cloudify-recipes/tree/master/apps/computers recipe.