Last week Cloudify/GigaSpaces announced with VMware a partnership to advance open orchestration for NFV.
Just a small snippet from the announcement:
“…Cloudify with vCloud NFV can enable carriers to leverage VMware infrastructure assets and skillsets, with open source TOSCA-based orchestration from GigaSpaces. Cloudify with vCloud NFV users can deploy virtual network functions (VNFs) over hybrid cloud architectures, achieving automated lifecycle management of critical network functions and services. Customers can correlate information gathered through the VMware infrastructure with application requirements gathered through Cloudify to help deliver the best performance and utilization of the underlying resources. GigaSpaces will be developing a VMware vRealize Operations Management Pack™ that will enable infrastructure, event correlation, event notification and response, and policy management, enabling closed loop service remediation, proactive capacity planning and scaling.”
In this post, I will provide a deeper look into what’s really standing behind this partnership. But first, I’ll start with where it all began.

How it all started – a recap

Those who know me, and know the Cloudify project, engage with us frequently through the OpenStack and TOSCA communities.
A big part of our work with both of these communities set the stage for the beginning of our relationship with VMware, which started with the vCloud Air team as a result of a VMware decision to adopt a standard orchestration language (TOSCA) as part of its cloud strategy. Our first engagement was intended to offer an open standard blueprinting service (similar to AWS CloudFormation) for vCloud Air. It was through that initial experience that we came to learn about, know and appreciate VMware as a product, and as a company.
As karma would have it, around that same time VMware launched a new NFV group focused on delivering a new NFV platform. This NFV team learned about  the work we’d done to integrate TOSCA into vCloud Air and saw how it could be beneficial for NFV. This was more or less obvious due to the fact that TOSCA and open orchestration had already started to emerge as high-priority requirements in many NFV projects.
With VMware, we quickly started partnering in three main areas:

How is our relationship with VMware different than others?

One of the common question that I get whenever the partnership with VMware is brought up is, “How is the relationship with VMware different than with other partners?”
Well, I must admit that at first it took me a while to really put my finger on it.
The main “litmus test” of any relationship is how long it lasts. The dynamic is such that an “arm’s length” relationship may draw a nice spike of interest at the time of announcement, but if there isn’t real substance behind it and a strong business alignment, those types of relationships fade. A good example for that is VMforce.
Our relationship with VMware is nearly two years old now. This is a strong indicator in and of itself that the relationship is closer than “arm’s length.” For a partnership to last there needs to be strong business alignment and some real substance behind it at the product-level as well as joint customer demand. Let me explain.

By business alignment I’m referring to the extent that the type of customers and the value that we sell to those customers is aligned or in conflict with one another. From a Cloudify perspective, I mapped three core business values that drive both organizations, and are representative of this synergy:

So, while VMware may not be, strictly speaking, an open source infrastructure player, it actively supports the open orchestration agenda as a strategic technology option for customers and selects partners with this core value in mind. VMware is also an active member and contributor in open source orchestration initiatives such as Open Source MANO and Open-O.

The technology/product behind Cloudify and VMware vCloud NFV integration

The second criterion for a sustainable partnership is actually having substance behind the solution. By this I mean real product features and interoperability that would make the two work as first-class citizens in each  partner’s respective product portfolios.
And that’s the icing on the cake in this partnership. In the context of Cloudify, this partnership crosses almost all of the leading core VMware products and focal points, and includes the following features and plugins:

The thing that I’m pretty excited about is the Cloudify/vRealize Operations management pack which we’ve announced. It is currently in early beta, but it is very promising in its capabilities. The management pack lets VMware operators monitor and control all of the Cloudify deployments through the same vRealize Operations tools. This also includes the ability to monitor failure and take corrective actions to repair a failed instance and add instances to increase capacity of the underlying infrastructure.
It will also provide a consolidated log view through vRealize Log Insight. This integration shows that Cloudify can be integrated nicely into the VMware vRealize Suite. The diagram below shows how this integration is going to work (Note: it’s in early beta, so expect improvements and tweaks for the GA. Also, feel free to provide feedback, so we can be sure to deliver a stellar final product).
The recorded demo illustrates how it’s now possible to monitor a Clearwater IMS deployed by Cloudify and managed using the vRealize Operations dashboard. VMware operators can view the topology of the Clearwater IMS alongside the actual infrastructure utilization that it runs on through the vRealize Operations management console. It also shows how we can gather the utilization metrics and present them in the context of the IMS service, making vRealize Operations more service aware.
In addition, we can see (Figs. 1 & 2, below) how an operator can take corrective actions in case of a failure or capacity shortage by executing Cloudify workflows directly from vRealize Operations. 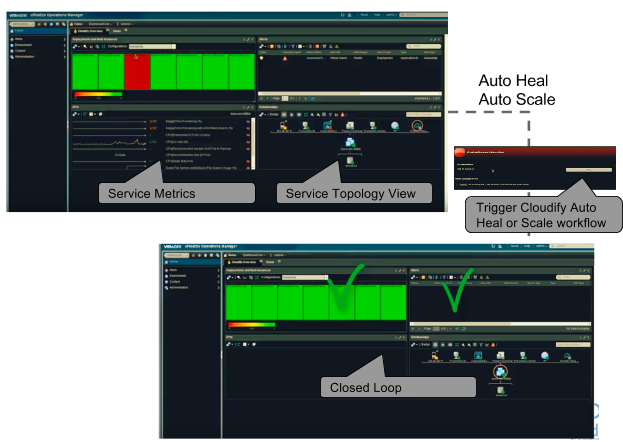 VMware comes with a strong partner and ecosystem DNA.
Through our work with VMware’s Telco NFV group, we have brought together many of its ecosystem partners to collaborate and create joint solutions that actually work. In our case, this partnership includes work with Metaswitch, Brocade, Athonet, and Versa just to name a few.
In the context of NFV this ecosystem DNA has become a critical and driving force, as it is clear that a single-vendor solution works against the entire idea behind the move to NFV in the first place. At the same time taking the best of breed approach comes with a high toll of complexity and maintenance.
After lots of hurdles at the beginning, I feel that we are starting to see the fruits of this work which at the end of the day provides the flexibility of choosing the best solution, all without the hassle involved with making them to work together. Our VMware-led collaboration has resulted in the creation of an initial set of VNF blueprints:

Those solutions are still being developed and are at different levels of maturity, but what’s nice to see is that VMware has gotten all of these players to commit real resources to make the collaboration work. I’m optimistic that we’re on the right path. We can see these efforts delivering true results are already bearing fruit.

What’s coming up next?

At GigaSpaces, we have put together an ambitious road map, and are always looking to receive feedback on whether we’re on the right track. Below is the list of features, integrations, and support we are hoping to release in our upcoming version. Let us know what you think.
Cloudify 4.0 will include additional enhancements in the following areas:

We continue to enhance the list of supported VNF blueprints with the addition of MetaSwitch SBC, Brocade vRouter, Fortigate, Versa, Cisco, Palo Alto Firewall, Athonet VoLTE. This will be part of our Cloud Native VNF initiative …
All this comes in addition to the many other Cloudify 4.x features such as enhanced multi-tenancy and security, hot-failover, integration with ARIA that will include full TOSCA compliant support, support for the Cloud Native stack through Kubernetes and Docker Swarm which together provides a great platform for driving the next generation Cloud Native VNF  so stay tuned!

Meet us at OpenStack Summit Barcelona

Both the Cloudify and VMware NFV team will be presenting at this week’s OpenStack Barcelona.  For those at the show this could be a great opportunity to meet you in person and demonstrate how this joint collaboration can be useful for NFV and OpenStack community.
You can find details on where to find us at the event or simply schedule a meeting.