In our recent release of Cloudify 4.4, we made some really solid improvements and added great new features to make the user experience a breeze. Read about them here. One particular enhancement that is quite significant, especially for production deployments, is the Deployment Update feature, which is a built-in workflow that can be run from the UI or CLI.

The deployment update feature enables users to add, remove, and connect new nodes in your existing deployment, while retaining the state of your current settings, instead of creating a new deployment.
A deployment can be updated in any of these three ways:

Updating Inputs in the UI, such as the web server URL or port endpoint, and setting specific Actions are simply a matter of changing the information and clicking “Update”. Those are trivial compared to migrating to a new service.
When an architectural change is required (such as in the example below), there is a lot more to consider. Therefore, we need to go back to the blueprint in order to make the necessary changes.
The update workflow execution occurs roughly in this order:

In order to get a better understanding of what the Deployment Update does, let’s start with the assumption that you currently have a basic Continuous Integration pipeline. Github, Jenkins, a testing tool, artifact repo, and then Cloudify for deployment and lifecycle management of your infrastructure, application, network, etc. We will also take it as a given that you have deployed your application – in this example, an e-commerce site – with all the VMs, DBs, LBs, Firewall, and all that.
After doing some research, a decision has been made to migrate from the current local database running on AWS to Amazon RDS. But how can this be done in an automated way? After all, we will need to update infrastructure resources, application resources, networking resources.
In this example, you would be required to change infrastructure by moving from a VM running your application to the new service, create a new node to connect to the DBaaS ensuring zero downtime, decommission the old database nodes, update relationships to the existing nodes, and update inputs such as the URL and port.

How the magic happens

So, let’s see how it all goes down step-by-step in Cloudify.
First, we start with the below initial (sample) blueprint which will spin up the required VMs in AWS and installs the e-commerce app, DB, and FW. We also have our inputs file with the DB information – let’s call it inputs.yaml.

Option 1: Using the Console UI, you can go to the Blueprints page and upload the blueprint, create a deployment (we’ll name it ecom_app), and execute the install workflow.
Option 2: From the terminal, run the cfy install command which will upload the blueprint to the manager, create the deployment, and run the install workflow: cfy install app_local_db.yaml -i inputs.yaml -n ecom-app

Now that we have our running deployment, we will create the new blueprint (app_rds.yaml) with the changes we need to make and upload it to the manager. Use the link above to upload the blueprint or run cfy blueprints upload app_rds.yaml from the terminal. 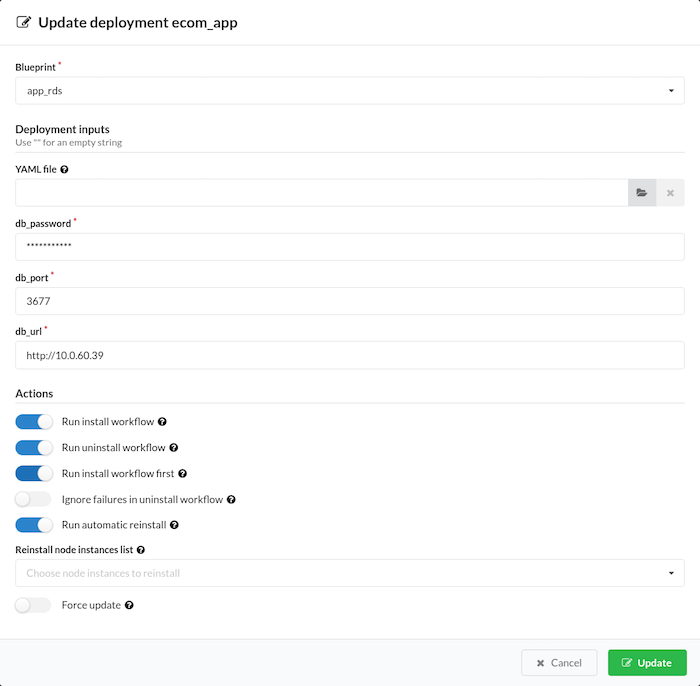 Once there, you can insert the ID of the blueprint being used for the deployment update and click on the Update button.
As you can see, we are updating a few things here:

Deployment after update with tooltip notification

And that’s it. We just orchestrated the infrastructure migration of our VM-based database to AWS RDS using Cloudify!
As a bonus, we have a fantastic video detailing this feature and many others which you can watch below.