Sometimes all it takes for a brilliant idea, is three great minds over a cuppa. It was a radiant April morning at the Rome’s Euro16 Hackathon, when Bartosz Michalik, Amartus, and Donald Hunter, Cisco, driven by a sudden fit of caffeine deficiency syndrome, ventured to the coffee tables and stumbled upon Shay Naeh from Gigaspaces. They exchanged pleasantries, cracked a few jokes, and then moved to the real business. The plot thickens…
Bartosz and Donald had been actively engaged in the OpenDaylight User Network Interface (UNI) Manager project, an open initiative, which focuses on implementing APIs that allow service orchestrators and management applications provisioning of resources to enable CE 2.0 services realization in hybrid networks. Now, after months of blooming cooperation, the two engineers were determined to promote the results of the project, and demonstrate it to a wider audience in a Proof of Concept.

Get the White Paper – Making Your Virtual Appliance a Cloud Native VNF.  Go

Their plan assumed demoing end-to-end provisioning of a standardized MEF E-Line service in a multi-vendor SDN environment. The UNI Manager project sits between Lifecycle Service Orchestration Presto (LSO) and Adagio Interface Reference points, leaving the LSO Legato to achieve the complete end-to-end use case. The plot settles….
Shay Naeh was the leader of MEF’s OpenLSO Service Function Chaining project, and Bartosz and Donald quickly realized that teaming up would enable them to realize the end-to-end demo. Moreover, the bump-in-the-wire NFV scenario that Shay’s team was working on during the LSO Hackathon could make a powerful enhancement to their initial plan.
From then on, the goal became clear – to build an end-to-end CE 2.0 service provisioning with NFV overlay using only open components. Gigaspaces, with its Cloudify platform, a stateful, generic TOSCA-based orchestrator, was able to fill the gap between Presto and Legato reference points. Cisco would provide the devices and the integration layer within the UNI Manager project, Amartus – as a software integrator, would ensure the communication between all elements of the end solution – the resource layer, the domain controller and the management layer (and upwards). All components of the solution were in place. 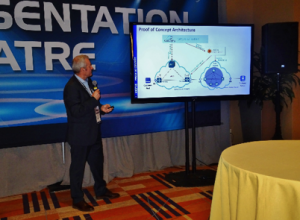 A dozen coffees and a few hand-shakes later, the collaborating parties developed the detailed architecture of the project, and selected MEF16, a global gathering of networking professionals happening in November 2016, to showcase the solution. It was a natural choice for an architecture so lavish with MEF content: assembled from the building blocks developed as a result of MEF LSO Hackathons, showcasing the maturity of MEF LSO Presto API, including provisioning of a standard E-Line EVPL service, and using MEF LSO OpenCS components. 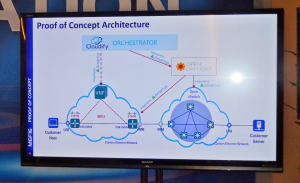 In the first step, the user manually installs the lifecycle service deployment in the Cloudify GUI to launch the service activation process. The orchestrator then sends the activation request to the OpenDaylight controller, which pushes it further and configures the requested components (Cisco and Open vSwitch devices).
As a result, a complete, end-to-end E-Line service is established between the service endpoints, spanning through two multi-vendor domains controlled by the ODL and managed from the top by a technology-agnostic, TOSCA-based orchestrator.

In the second step, the user installs the VNF deployment in Cloudify to set up the virtual network function for traffic monitoring (an open-source tool).
When the VNF is activated, the orchestrator immediately pushes the request to ODL to reroute the MPLS connectivity traffic between the Cisco devices through the on-boarded VNF.

In this part, the user executes the ‘uninstall’ workflow on the service lifecycle deployment in the Cloudify GUI. This deactivates the entire service and releases all the resources.
Since the integration effort was on the Amartus’ side, the entire PoC lab was set up in one of the company’s offices in Europe, with Cisco’s and Gigaspaces’ support. During MEF16 the presenters were connecting to it remotely via VPN from the US to demo the solution live.

Cloudify’s role in the PoC was twofold, first, to create & manage deployments for the entire PoC set up, and secondly, to manage the entire end-to-end service lifecycle, including the dynamic on-boarding of the traffic monitoring VNF. For the purpose of the PoC, the open-source version of the orchestrator was deployed, available for download from /downloads/get_cloudify.html.
The Cloudify orchestrator deploys and manages applications described in orchestration plans called blueprints. In order to implement the assumed architecture, appropriate blueprints and deployments were defined. Next, automation processes described in the workflow scripts were executed, and execution commands were issued to the agents. Cloudify had to be enriched with appropriate plug-ins to handle the communication with the particular Cisco devices and ODL customization, but thanks to the orchestrator’s flexibility, it was possible to easily implement all the required extensions.

The OpenDaylight project delivers an open-source SDN controller with multiple extension modules, which make it go beyond an OpenFlow protocol only solution. The UNI Manager project used in the demonstration provides implementation of MEF NRP (Network Resource Provisioning) API that enables resource provisioning in multi-vendor networks. Currently, the project defines drivers for Cisco equipment and OVSDB-compliant devices. However, drivers for equipment from other vendors will arrive shortly.
The ODL role in the PoC was to automate provisioning of network resources. UNI Manager was deployed with two device drivers – one talking REST to Cisco CSR1000v devices, the second one talking to OVS virtual switches.

To recreate a typical, multi-vendor setup of a service provider network, resources by two different vendors were selected.
For Cisco, the initial assumption was to present on physical devices. The idea later evolved, and in the end virtual CSR1000v routers were used, with MPLS topology based on OSPF and managed via RESTConf. The choice of the protocol was intentional and allowed to fully use the potential of the devices by e.g. implementing the QoS.
On the Open vSwitch side, the Mininet emulator was used for the virtual switches configuration, and OpenFlow and OvSDB for communication.

Apart from showcasing the UNI Manager, the PoC has achieved a number of important goals: it demonstrated the use of MEF-defined Lifecycle Service Orchestration architecture and interfaces, spotlighted the benefits of agile, automated service provisioning in hybrid, multi-vendor networks, and showcased the combined advantages of LSO, SDN and NFV. The distinguishing factor that sets it apart from a number of other seemingly similar Proof of Concepts is the fact that it is fully based on open-source components. Moreover, it uses one of few MEF standardized APIs defined for the Presto reference point.
The PoC was presented live at MEF16 show in Baltimore, Nov 7-10. The video showing the steps of the demo is below.